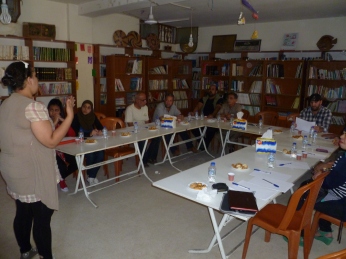 Members of the Shatila community—including NGO representatives, political leaders, officials from the Popular Committee, and concerned parents—gathered in CYC’s library on the afternoon of Wednesday, October 9 to listen to a presentation on the findings of a comprehensive survey, which asked 350 Shatila youth about the prevalence of drug-use in their environment, economic insecurity in their homes, and other questions probing the detrimental elements in their lives in the camp.

Following a meticulous powerpoint presentation, replete with detailed statistics and extensive interpretations, delivered by CYC staff and youth volunteers, a conversation opened up among those in attendance, including a contingent of youth from the camp that had helped collect data for the project. This diverse group engaged vigorously with the issues raised in the presentation, with active participation from youth and adults alike.

The discussion ultimately centered on the problem of drug-use in the camp. While those in attendance acknowledged that this issue was a global one, and thus difficult to address solely in the confines of Shatila, they also recognized the importance of making strides within the camp to limit its harm. The group talked about the problem with a measured tone and avoided extremes, making clear that local drug dealers were best dealt with not as criminals deserving of total scorn but as misguided individuals needing rehabilitation.

Many agreed that drug-use had a negative impact on social and political participation and from this point the conversation transitioned to the topic of empowering a new generation of youth to take up the task of agitating for the rights of their people. In this vein, those in attendance advocated the establishment of a youth committee that would work with the camp’s Popular Committee, to ensure both that the voices of youth were involved in democratic decision-making in the camp and that these same voices remained active into the future.

This site uses Akismet to reduce spam. Learn how your comment data is processed.